Happy Hank. He’s three. He’s potty training. He’s full of nonsensical monologues that he needs to share very VERY urgently. The other day I said, “Hank. We are not even going to talk about going outside until you are wearing underwear.” Happy Hank replied happily, “OK!” ran off and returned like this. “I’m wea-wing unda-wear!” Nice.

I’ve had three-year-old boys before. They’re all weirdos but Hank has an added advantage as the beneficiary of his two older brothers’ loving guidance. He not only has to do everything they do, but he picks up everything they say. Hank runs around joyfully shouting things like “Goodbye cruel world!” (“G’bye cwool wold!”) and “Come on over here and fight me!”

Here are the three of them doing the scooter ballet – this is apparently an irresistible urge when a kid gets on a scooter. They were all figure-scooting around the driveway last week. So graceful.

But my happy Hank also says things like, “You look so pwetty, mommy!” whenever he catches me checking a mirror. And “I like your pink nails, mommy!” whenever I paint them. So overall I guess it’s worth keeping him.

I’m doing my best to try to prevent any future middle child angst (hopeless I’m sure) so I made him this illustration of a story we made up. It’s about a little kid named Hank who loved airplanes so much that one day when he was running around the front yard with his arms out going blblblblblb pretending to be an airplane he just took off into the air. Nobody could believe it! Mommy and baby Rosie were shocked. Big brothers Milo and Walter were amazed. And everybody was so jealous. They all watched him fly around above the yard until he got tired of going blblblblblb and he came down for a smooth somersault landing and everybody clapped and cheered and begged him to teach them how to fly like airplanes. The end.

And you know, it’s not so far from the truth. This sweet kid is so happy he kind of defies gravity. We all like him a lot. But we love him the most when he wears underwear. 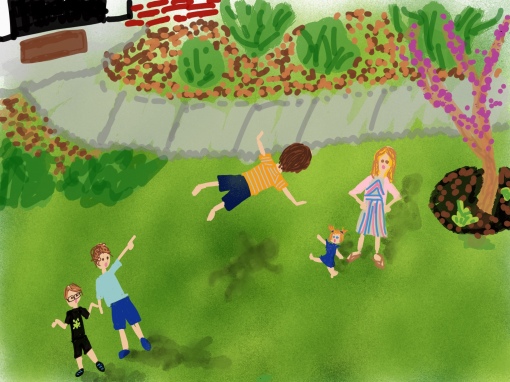