A few weeks ago during church Walter was acting up so I pulled him onto my lap and said, “Walter, can you sit quietly and play with your airplane? You’re such a big boy now.” And he sat up straight, puffed out his chest, and declared in a voice audible within a three pew radius, “I’m a big boy!”

This got Milo’s attention (and everyone else’s) and he, perhaps not wanting to be outdone,  declared in a voice that was just as loud and proud, “I’m a cowboy penguin!” 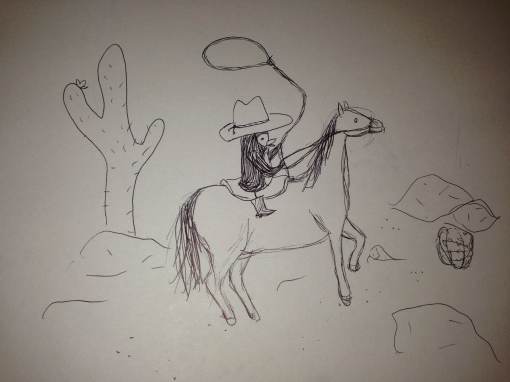 The other day I was headed out the door with the kids when I caught sight of myself in the mirror. I was like, “Whoa, nelly. Where do you think you’re going with no makeup on, Grandma?” Because, see, now that I’m an old fogey I don’t have the option of going out in just my face. So I made the kids stand by the door and wait while I ran up to my bathroom to throw on some concealer and mascara to wake things up a little bit. Know what I found when I got upstairs? I already had concealer and mascara on. It just wasn’t enough to disguise the terrible things that time, child rearing, and staying up late reading have done to my face. (Plus, I’m apparently getting senile.)

The thing is I’m turning 31 this week. And, I don’t know, it just feels wrong. And waaaaaay older than 30. Like, maybe it’s time to start acting like a grownup or something? (You know, since I obviously look like one.)

And I don’t mean to be that cliched female bemoaning her lost youth, but… well, I do kind of feel like bemoaning sometimes.

But there are good things about getting older, right? Right? Like, maybe a little perspective?

And while we’re on the subject…

… of kids learning how the world works, I have drawn for your consideration an illustration of what Walter believes will happen if the wind blows hard enough.

He holds on to the top of his head with this look of panic and screams, “My hair!”

The weather is slowly turning nice again. The other day Walter turned to me and pointed at the sky and said, “Look! The sun’s fixed!” Man, I hope he’s right.

But this got me thinking about how exactly the sun got fixed (new light bulb?) and who might be in charge of such a thing. Persephone’s mom, Demeter? Probably.

In other news, I have decided to raise my kids pagan greek.

Sick Joke (or How I Met My Husband)

I know February is supposed to be the month of love but I have a soft spot in my overly-romantic little heart for March. See, I met my husband sometime in March of 2002 (holy crap that’s a long time ago). I’m not sure of the exact anniversary because I didn’t write down in my journal, “Today I met the boy I’m gonna marry!” Mostly because I didn’t have a journal but also because I didn’t know yet. (I was pretty sure after our first date but that’s another story)

Anyway, we met in the library, which is kind of picture perfect for a bibliophile like me and further proof that the universe approves of this relationship. And when I say, “we met in the library,” what I mean is “he met me in the library.” Because he had arranged it all that way on purpose. But again, I didn’t know any of that yet. I was sitting in the Humanities section using the giant Oxford English Dictionary for my linguistics homework (I have petitioned Matt to get one for our house for sentimental reasons and because it is awesome but since the hard copy is like 20 volumes I haven’t convinced him yet). And this super cute boy walks up to me and says,

And he said, “Yeah, you definitely are. I missed class last Friday. Is there any way I could borrow your notes?”

And I said, “Okaaaaaaaaay.” And, nonplussed, I handed them over.

And I remember sneakily checking him out and thinking, This is highly suspicious. This boy is adorable but he is either really confused or this is his sick idea of a joke. Maybe I am having a really good hair day or something because he apparently thinks I am some kind of supergirl who dates cool guys who wear smart-people glasses. Well… he’ll figure it out eventually. But maybe I should just sit back and enjoy it until he does.

So that’s what I did. And he still hasn’t figured it out. 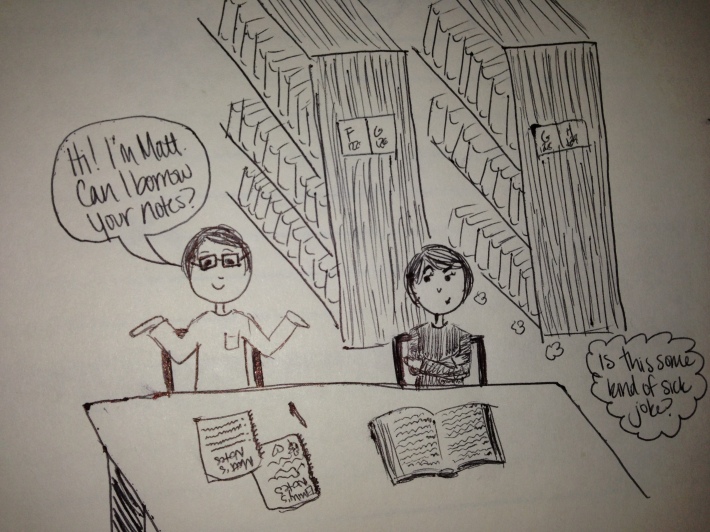 Who’s Afraid of the Big Bad?

Wolf, that is. (Sorry – Buffy reference for my sister, Laura, who is the subject of this post) I think we may have worked out some sort of deal in the aether or wherever it is we were before this life that she could have all the ballsiness that was intended for me. Because she has a lot and I have zero.

Laura is currently nine months pregnant and is holding down a job as a zookeeper. Recently, her OB asked her if things at work were alright and if there was anything that made her uncomfortable. I’m guessing that generally when the doctor asks her patients this the answer is something along the lines of “I wish I weren’t on my feet so much,” or “I’d appreciate longer breaks,” or some such. But my little sister’s answer was, “Well, I get a little nervous every time I go into the wolf enclosure because with the snow and ice and me being nine months pregnant I am not very steady on my feet. And the last time I fell while inside the enclosure, one of the wolves went into full on predator mode and tried to eat me. Luckily we had remembered to shut the gate, so all she could do was throw herself against the fence in a wild frenzy of thwarted carnivorous intent. But it could be bad if that happened again.” (Apparently wolves are programmed to exploit any perceived weakness, looking for the easiest prey. A clumsy pregnant omnivore with no claws? Chow time.) Cue my sister’s doctor falling over into a dead faint.

Just kidding. Laura’s doctor wrote her a note excusing her from any further excursions into the wolf habitat “for fear of slipping, falling, death, and disembowelment.” (Or something along those lines, I’m a little hazy on the details.) Anyway, the point is that the note had to be written in the first place. I mean, really. When I’m nine months pregnant the scariest thing I do is eat chocolate right before bed (because hello – killer heartburn).

It’s just horrifying enough to be funny. But maybe my sister is wrong. Maybe the wolves wouldn’t try to eat her. Maybe they would just cesarean the baby out with their teeth and then raise her as their own as payment for not eating my sister. Remus and Romulus style (catch up on your Roman myths if you don’t know what I’m talking about). And I have to say, if Laura couldn’t raise her baby herself, animal-lover that she is, having a pack of wolves do it for her truly might be her second choice.

My baby niece with her wolf-mother. I will send her raw meat and a new bone for her hair once a year on her birthday.

Can’t wait to meet you next month, little wolf-girl! Laura, please stay out of the wolf cage.

P.S. Wolves are hard to draw.

Milo loves to sing. (Kind of like his crazy mama.) He’s been learning the song “I am a Child of God” at church and it is really cute. When he sings it right. Usually he doesn’t. Like tonight he was singing the first line over and over again like this – “I am a child of peanut,” “I am a child of peanut.” It’s stuff like that. “I am a child of cat mustache,” “I am a Thomas Percy Toby,” etc. But I have to say my favorite was this one: “I am a Jesus Crayon Pencil.” I’ve been giggling about it for days. But you know, in that time I’ve had the opportunity to delve for deeper meaning in that little phrase. I mean, the song “I am a Child of God,” is really about how special and valuable you are, right? So, “I am a Jesus Crayon Pencil” kind of connotes the same thing. I mean, think of the possibilities! A Jesuscrayonpencil would be extremely special and valuable. So you see, I’m not failing his spiritual education after all.

Jesuscrayonpencil draws on water! In color.

Growing up, my dad always hated crowds. Like, HATED. I never really got it – I mean, what’s the big deal? Till now. Crowds + Parenthood = Agoraphobia. The other day at the children’s museum, we were the unwitting victims of a school holiday. There were kids everywhere. It was loud. It was stressful. It made me hate the human race. When we finally escaped and were loaded into the car, I knew the kids were going to pass out on the way home due to the sheer exhaustion that results from being surrounded by that much shrill, horrible energy. So, like any self respecting mother, I turned the music up way loud (The Black Keys – Milo’s favorite) and opened all the windows to gently encourage them to stay awake.

I turned around to find Walter asleep like this.

Probably the saddest thing Walter does these days is try soooo hard not to be put to bed. He’ll be tired and cranky and maybe crying and I’ll say something like, “Uh-oh, Walty, I think maybe you are tired. It’s time for bed, sweetie.” And he will look at me in wide-eyed terror and scream “No! No! I not tired! I not go to bed righ’ now, OK???” And I’ll say cheerfully, “But honey, you are so cranky and see how you’re crying and you feel bad? That means you’re tired!” (Because, you see, I know how effective that kind of logic is on kids.) And first he’ll give me a look of disgust before turning and running away but when that doesn’t work out he’ll take a few shaky breaths and wipe his eyes with open palms and say in this stab-you-in-the-stomach little voice, “I better now, Mommy. I better.” And if that doesn’t knock over your tough-mommy tower of blocks, then I don’t know what will. So I let him play until the process starts over again (around 3 minutes) and this time I forcibly pull him from the room all while he’s shouting, “I better now, Mommy!!! I better! I be-heh-heh-terrrrrrr!!!!”

And it all seems strangely reminiscent of the following… (beware of naughty word at :52)

We finally had to get rid of Milo’s toddler bed. He and Walter ruined it by cannonballing off the edge and onto the mattress. Needless to say, the Target convertible crib we bought when I was pregnant with him was not meant to stand up to such abuse. I made Matt save the pieces, though, because I am hoping it can still be salvaged – for sentimental reasons, you understand. WHY fling themselves off the edge of the crib, you ask? Well, isn’t it obvious? 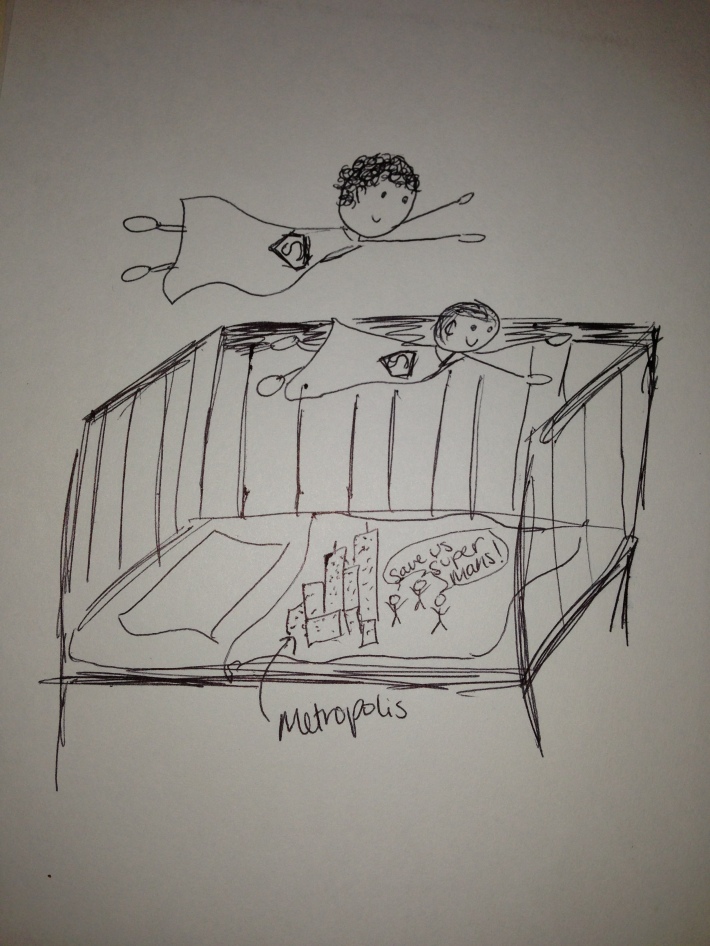 At least, that’s how they see it. This is how I see it…

And now he has a bunk bed.